"Based on the title, readers might expect a book of gross humor. Instead they’ll find a sweet story of friendship and competition in which everyone can be “best of the forest.” Woodchuck Chuck is an artist working in wood and the winner of the Best of the Forest art contest three years running. Then Scooter the possum shows up. When his painting Splatter Matters wins first prize, Chuck is angry and jealous, and he begins to doubt his own abilities. Each of the eight short chapters begins with a full-page illustration that, with the chapter heading, hints at what is to come. Pictures throughout break up the text so new readers will not be intimidated. Chuck’s friends provide kid-level comic relief with knock-knock jokes. (Though adults may chuckle at Scooter’s similarities to Jackson Pollack and the allusion to current grass-roots movements, these references will mean nothing to beginning readers.) With wisdom beyond their years, Chuck’s forest friends counsel him to gracefully accept his second-place recognition, and he rather quickly realizes that “awards are just whipped cream on a sweet-potato pie.” The final chapter, “Lesson Learned,” guarantees that no kid can miss the message. It’s a kindhearted beginning chapter book, but second-graders may wish it had some vomit jokes."—Kirkus Reviews 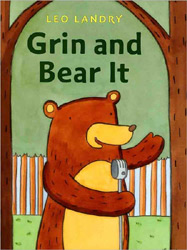 Grin and Bear It
Written and illustrated by Leo Landry
Charlesbridge Publishing
ISBN: 9781570917455, hardcover, $12.95
Bear dreams of becoming a comedian. His jokes are unbearably funny, and he wants nothing more than to make his friends laugh. But Bear has a problem. He has stage fright. When Emmy, the comic hummingbird, discovers Bear’s jokes, Bear learns that there’s more than one way to achieve your dream. Told in seven short chapters.

“Landry’s droll pencil-and-watercolor illustrations are filled with humorous graphic elements and little details that will encourage children to slow down and enjoy the text and the pictures. The seven very short chapters move along quickly, helping new readers gain confidence. With more words per page than generally seen in an early reader, this is an ideal bridge to slightly more challenging books. Everyone–Bear, friends and readers–will laugh in the end.”—Kirkus Reviews

Fat Bat and Swoop
Written and illustrated by Leo Landry
Henry Holt and Company
IEBN: 0805070036, hardcover, $15.95
Fat Bat and Swoop love to make mischief. When a fun prank backfires, the friends add up to three.

“Landry’s light touch in both word and image result in a promising start to what could be an endearing series.”—The Horn Book Guide 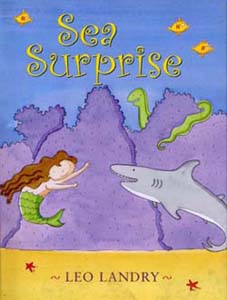 Sea Surprise
Written and illustrated by Leo Landry
Henry Holt and Company
ISBN: 0805066454, hardcover, $15.95
“The light tone, tongue-in-cheek humor, wordplay, and humorous situations are accompanied by equally silly sketches on every page. Generous font and white space; a limited but not bland vocabulary; and a fast-paced story all add up to a winning underwater tale of friendship that new chapter-book readers will want to read over and over.”—The Horn Book

“Planning a surprise party is always fun; there are secrets as well as celebration. In this early chapter book, a group of fish friends have a special reason for surprising Eel. Having lost his electric zap, he needs a shock to jolt him back. With active, comic pictures on every page, each of the eight chapters is full of underwater action…”—Booklist 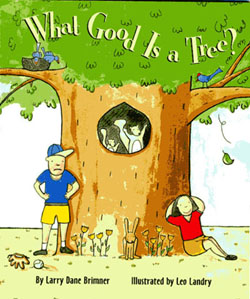 What Good Is a Tree? (Rookie Readers)
Written by Larry Dane Brimner and illustrated by Leo Landry
Children’s Press
ISBN: 978-0516264141, paperback, $4.95
When a boy wonders, “What good is a tree?” he and his sister come up with a lot of answers, from using it as a fort to making it second base.